Adedigba was said to have been on his way from Ibadan to Abeokuta last Saturday when the officers later identified as Inspector Sunday John, Sgt Jimoh Asimiya and Sgt Solomon Adedapo, stopped his car and ordered him out of the car.

The officers allegedly forced the students to open his bank application where they allegedly demanded N250,000 from the balance of the N288, 000 seen on the phone. 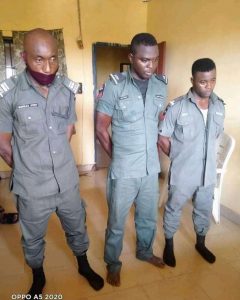 The students reported that the officers had earlier demanded a sum of One Million Naira from him and that his identification as a students didn’t bother the officers.

He said, “I told them I am a LASU Student they told me to unlock my phone but I refused; they threatened to kill me if I didn’t cooperate with them. They brought out a shocker, so I obliged.”

“The officers asked me how many bank accounts I had,” he continued, “I told them I had two, GT bank and Union bank. So I opened my phone due to the threat from them and upon going through it, I was asked to pay the sum of N1,000,000 but I told them I didn’t have up to that amount.

“Later on, they asked me to open my bank app, where they saw a balance of N288,000 and told me they would collect N250,000 out of it even without telling me what I did wrong.

“I begged them that I needed the money for some things; they insisted on collecting N150,000.”

He later revealed that the officers later took him to a PoS point where a sum of N150,000 was transfered with additional N3,000 as transfer charges.

The transaction receipt of the money showed Ajayi Abayomi Oluwafemi with account number 0131834643 with Union Bank as the receiver of the extortion.

In a statement released by the Command’s Public Relations Officer, Abimbola Oyeyemi, the officers were tried through departmental orderly trial, found guilty and dismissed from the service.

According to the release by Oyeyemi, the money was retrieved from the officers and handed over to the victims who was also part of the orderly trial to give evidence against the officers.

The statement read, “Having heard about the incident on social media, the Commissioner of Police, Edward Awolowo Ajogun, ordered the immediate arrest and detention of the officers involved in the dastardly act.

“The three policemen were quickly identified and apprehended. The money was recovered from them and returned to the victim.

“They were subsequently arranged for departmental orderly room trial on three count charge of Corrupt practices, Discreditable conduct and Disobedience to lawful order.

“They were found guilty of all the charges, and subsequently dismissed from the force to serve as deterrent to others in their shoes.”

Meanwhile, the Commissioner of Police, has appealed to members of the public to always endeavor to report any act of misconduct from any officer of the command to him personally or through any of the principal officers of the command.

He also warned officers of the command, according to the statement, to desist from any act capable of tarnishing the image of the command as such will not be condoned